Lorry drivers will be allowed to increase their speed from 40 to 50mph on single carriageway stretches of the A9 on a trial basis next year. 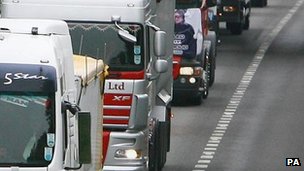 The pilot will be introduced at the same time a system of average speed cameras becomes operational on the road between Dunblane and Inverness.

Hauliers argue that driving at 50mph reduces tailbacks on the route.

HGVs are already permitted to travel at that speed on the few sections of dual carriageway on the A9.

The trial and average speed cameras are measures aimed at raising safety and easing traffic flows while work is done to upgrade the road.

The A9 from Inverness to Perth is due to be fully dual carriageway by 2025. The cost of the work is expected to run to £3bn.

Transport Minister Keith Brown said the pilot was dependent on the introduction of the cameras.

He said: “An extensive review of the available evidence has been undertaken in considering this pilot and we have also taken the views of A9 users, the business community and hauliers into account.

“It is clear that the average speed camera systems will bring safety improvements to the route and the pilot will bring operational benefits and may further improve driver behaviour by reducing frustration.”

Phil Flanders, of Road Haulage Association, said: “We have been working for this since the Scottish Parliament Freight Inquiry report was published recommending a trial.

“We will be doing all we can to ensure the pilot is a success and that it will benefit not just the freight industry but the whole of Scotland’s economy.”